In 2001, the Prince William County Bar Association celebrated its 60 Anniversary at the annual Bench Bar Dinner Dance with great fanfare. Annual awards were given to recognize those in the profession for their outstanding work as court appointed attorneys, guardian ad litem, and professionalism. Arthur W. Sinclair, our last living founding member, was on hand to present the Professionalism Award, which bears his name, to The Honorable Frank A. Hoss, Jr. Judge Sinclair remarked, “Throughout [Judge Hoss’ law] practice, he demonstrated a commitment to civility, competence, and integrity with the court, his colleagues, his clients and the community. He was a good lawyer in the truest sense of those words. These qualities which we now term ‘professionalism’ led to his appointment as a Judge of the General District Court in 1978, and later as Judge of the Circuit Court in 1986. He is a gentleman, and by his example, he inspires others.”

Delegate Harry Parrish was another special guest at the 60th Anniversary Celebration of the Bar and presented House Joint Resolution No. 710 to Judge Sinclair, honoring him for a lifetime of service to the legal community. The PWC Bar, having located the original Constitution from the Bar’s organizational meeting, had a copy of the document framed and presented to Judge Sinclair as well. Sinclair was particularly moved by both presentations. 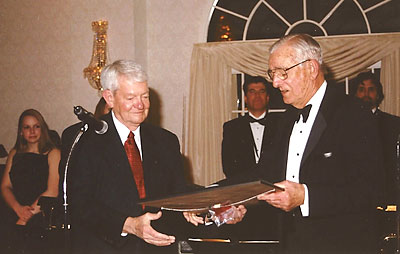 The founding members of the PWC Bar Association on July 25, 1941 were:

The Bar embarked on a historic preservation project leading up to the 60th Anniversary celebration. Working with the Manassas Museum, we were able to obtain photographs of the offices of the founding members, and those, along with other historical documents provided by Ed McGolrick and the late William May, became part of a pictorial display that was unveiled that evening and provided a snapshot of the earliest years of the PWC Bar. We also began capturing the living history of Bar by conducting a series of personal interviews with our more senior members. We were fortunate in that all members interviewed had connections with our founding fathers. Ten such interviews were completed, and from each an article was written and printed in the Bar’s newsletter in the months leading up the dinner dance.

It was a truly memorable evening with much of the organizational credit going to Donna McIntosh, Immediate Past President and Dinner Dance Chair; Mike Vanderpool, who inspired the request for the House Joint Resolution honoring Judge Sinclair; the law firm of Coon and Johnston who were the keepers of the original Constitution; and Alissa Hudson, who spearheaded the historic preservation efforts.